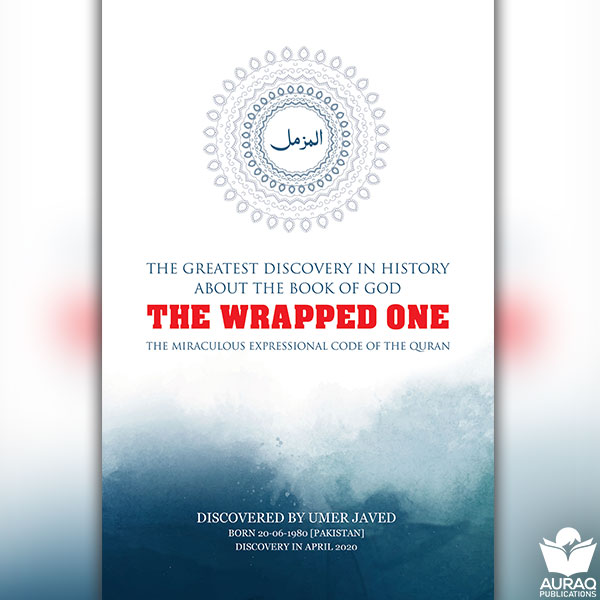 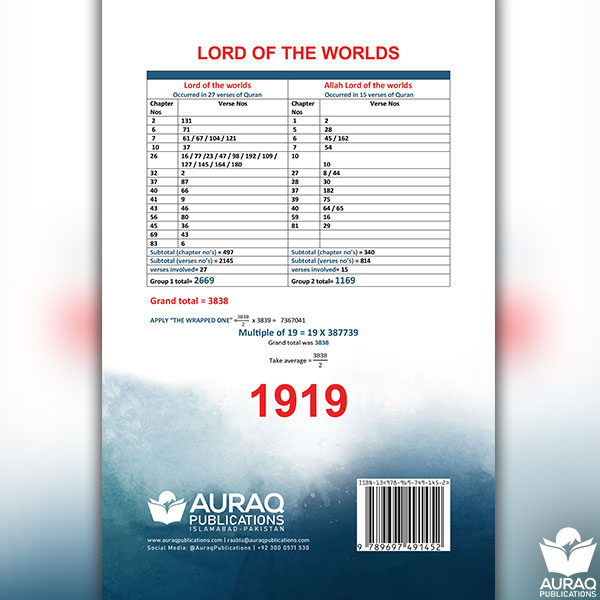 This book and the Code itself will provide the reader a simple, plane and irrefutable physical evidence of God’s existence and will authenticate, verify and confirm God’s Book (Quran) as a divine scripture.

Allah be praised who has given to a sinful man like me a supreme gift in shape of the Expressional Code of His book, The Quran. The Quran, which was sent down from God to mankind as a source of religious guidance through the last of the Prophets, Prophet Muhammad. Since Prophet Muhammad is the last Prophet, therefore, it automatically implies without slightest doubt that the last DIVINE BOOK from God to mankind is the Quran. I am an utterly sinful human being who has uncovered with God permission and decree, the expressional code of the Quran in April 2020. This code is referred to by God in chapter 73 of the Quran as “The Wrapped One”.
The Expressional Code of the Quran provides irrefutable physical evidence that Quran is a word of God and is not a word conceived or written by Prophet Muhammad or any other Human being. The code acts as a foundation on which God has designed His book and protected it from a slightest corruption. The Wrapped One Code irrefutably serves as a FURQAN [proof, affirmation and a Criterion] for whole mankind, since, it confirms and authenticates the Quran as a word of God through a physical evidence which can be witnessed with own eyes.
It is my firm conviction that the discovery of the expressional code of the Quran can neither be based on human capabilities nor it could be termed as a stroke of luck. I know very little of Arabic language in which the Quran has been sent down to the world by our Creator. Had this discovery been based on human skills or masterly grip over the Arabic language, then, anyone out of the billions of people far more capable then me in every aspect would have discovered the Code in last more than 14 centuries.
PRAISE BE TO ALLAH WHO HAS CHOSEN ME OVER MANY OF HIS BELIEVING SERVANTS TO UNCOVER THE GREATEST PIECE OF INFORMATION ABOUT HIS BOOK – THE QURAN

This book and the Code itself will provide the reader a simple, plane and irrefutable physical evidence of God’s existence and will authenticate, verify and confirm God’s Book (Quran) as a divine scripture. The reader belonging to any faith will witness with his own eyes hundreds of Quranic expressions fixed miraculously by God through The wrapped one code –a design which is considered impossible for any human being to imitate / apply. Seeing all the Quranic expressions fixed miraculously by God through The Wrapped One Code will automatically open a fresh window of opportunity for all readers to believe in Quran and in one God—God who has sent down the Quran as a source of religious guidance for mankind. The belief in One God and following only His source of religious guidance makes a person Submitter (Islam in Arabic). All submitters are believers in the sight of God and are given glad tidings from Allah. They will have great bounty and a promised eternal salvation in paradise due to their belief in One God and in upholding /following only and only His Source of religious guidance.
On the other hand, the disbelievers are those who believe in many gods instead of One God. These people either don’t believe in Quran or if they believe in Quran then they are not satisfied with the Quran and thus looks for other avenues / gods for their inbuilt satisfaction. These avenues / gods are in many shapes, sizes, varieties and concepts as per the Satanic plans. The disbelievers are also given tidings of a painful punishment in hell due to their zero belief / incomplete belief in the Quran.
As a fearful servant of God, my only aim is to present the expressional code of Quran with utmost sincerity of purpose. The code is bound to provide a physical evidence that Quran is a word of God. This evidence will be found irrefutable for Jews, Christians, Hindus, Atheists, Buddhists and people from any other religion. Any evidence which is based on truth and is also found irrefutable, can never be denied by anyone except by those people who are too arrogant to accept the truth and light from God. We all have been created by One God to worship Him alone. We all can be from different nations but we all can stand unified on the basis that we worship none but Allah, Lord of the Worlds. We all are bound to worship same God who had sent Moses, Jesus, Muhammad and many other Prophets and Messengers to mankind.

Umer Javed was born on 20 June 1980 in Okara, Pakistan. He studied from Garrison Boys High School Lahore Cantt and from Government College Lahore. He joined Pakistan Army as an officer on 29 August 1999. He has been retired from active military service on 2 July 2021. The Miraculous Expressional Code of the Quran was discovered by him in April 2020.  The compilation of all the Quranic expressions and writing of this book was completed by August 2021. He is happily married and blessed with two kids.

Be the first to review “The Wrapped One” Cancel reply