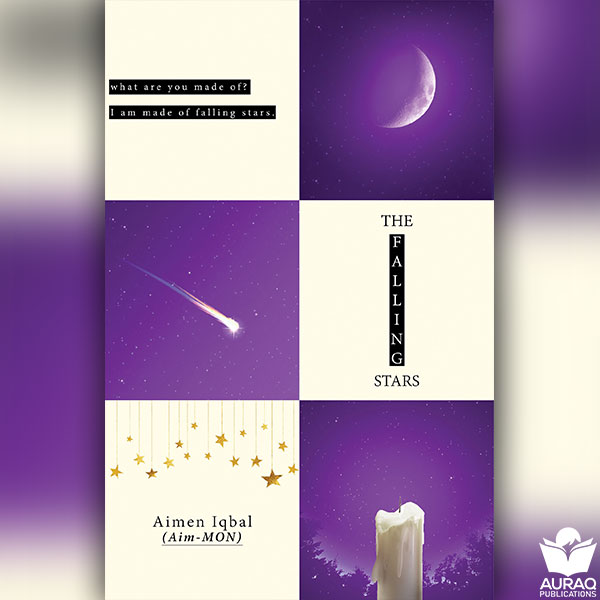 A collection of ruined words which were born from the emotions dwelling in the heart, by young Aimen Iqbal.

The Falling Stars is the first book of poetry collection by Aimen Iqbal. A collection of ruined words which were born from the emotions dwelling in the heart.

This book is divide into twelve parts each dealing with a specific topic. Each topic is just a presentation of how poet see the world, each poem deals with how to eradicate such errors or embrace them wholly.

From the difficulties faced by people due to criticism, the struggles of a dreamer and topics such as self-love, the book deals with topics of stereotypes of the East yet how the Sun always shines the first on East, poetry against animal abuse, the feelings of a writer and the magic of a reader, the beauty of nature and emotions such as pain and fear.

Aimen Iqbal is a Pakistani writer and a self taught literature student, despite doing Bachelors in a very separate field from a university in Karachi. At the age of five, she was admitted in Saint Patrick’s Girls High School, there she developed a love for English language and literature and somehow the textbooks of English became home for her. She started reading poetries and stories when she was nine year old. Just after a year of avid reading, the world turned itself into an art for her, and on holding the pen she turned the ache, the love, the need around her into words, both poetries and stories.

After going through a huge writing break, burdened by the pressure of education, she found herself completely out of place. The longing of home and the thirst of words grew vividly in her. The ache and the need of home dug voids into her. The voids turned her from Aimen to Aim-MON, when she turned again to her pen and her books now with a knowing of hunger, a roar of thirst, and a longing of home she found in literature. She started writing again. And despite the major she is trying to somehow complete, she self teaches herself English literature and vocabulary at home for she is afraid to be homeless again.

With these words she writes she builds the castles of her dreams and try to motivate others to work for their dreams. She believes Allah has created us all as gems and if we stand to shine together, we can eliminate the darkness of the world. That is all she has to say “Let us shine people, like the stars that twinkle fighting against the dark of the night.”

1 review for The Falling Stars