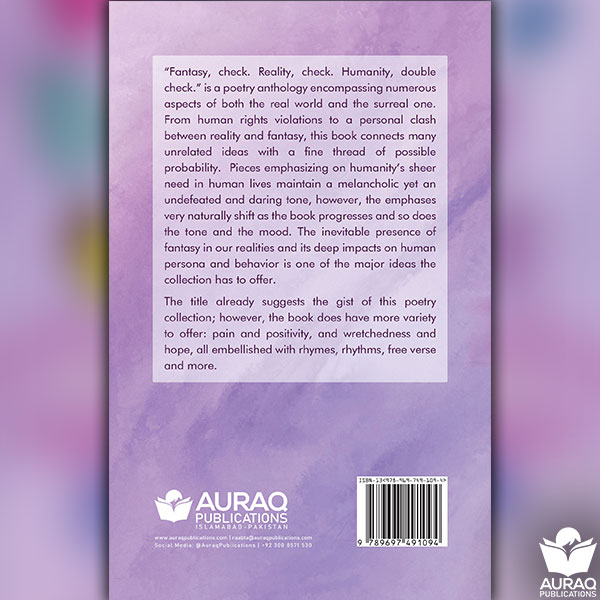 It is a poetry collection revolving around humanity’s sheer need in our lives and the inevitable presence of fantasy in our realities.

FANTASY, CHECK. REALITY, CHECK. HUMANITY, DOUBLE CHECK. is a collection of poetry that addresses numerous human rights violations including inequality and discrimination which in turn pave paths toward mental disorders. In addition to this war of humans as one against inhumanity, the book also elaborates the personal war of every human between what life has offered him/her (i.e. his/her reality) and what he/she craves for (i.e. his/her fantasy). This anthology begins with a chapter on humanity that contains poems encompassing all the aforementioned human rights violations, followed by the chapters on fantasy, reality, pain, and lastly, hope and positivity.
Fantasy and Reality are addressed as interconnected yet separate; we as humans find solace in our fantasy lands created in our minds but that peace is snatched away from us as soon as we return to our reality. Living in fantasy for too long can make us dangerously and unrealistically hopeful about our realities when in the end, there are always some unpleasant realities that we have got to accept. An important message this book gives out is that, since every human is at war (i.e. a war between reality and fantasy) at a personal level so, we as mankind should not hurt each other because when other humans contribute in empoisoning a person’s already tough reality a little too much, then that person is bound to look down on life’s reality which, in its essence, is not good for mental health. Moreover, the poems carry this message that it is mostly the inhumane behaviors and judgments of people around us that throw us into a never-ending abyss of self-hatred which we later transfer unconsciously or deliberately to others.
At the beginning, at the end and everywhere in between, every piece in this book somehow just reconnects with the idea/fact that humans are in sheer need of humanity in their lives.

Laraib Saad is a Pakistani undergraduate student, currently majoring in English Literature and Linguistics. Fantasy, Check. Reality, Check. Humanity, Double Check. is her debut book in which she has portrayed her views regarding the society and environments she has grown up and lives in. As a freshman in university, she had already discovered her passion in literature in general and in poetry in particular. Poetry has always acted as a perfect medium for channeling her beliefs, observations and learning and she has attempted to do the same with this work. She intends to keep on writing in the future and wants to try her hand at other genres such as fantasy in novel writing. Additionally, she finds herself drawn toward non-fiction and short stories at times as well.
Beginning her writing career with a poetry anthology felt like a right choice, and she hopes that it will turn out so.