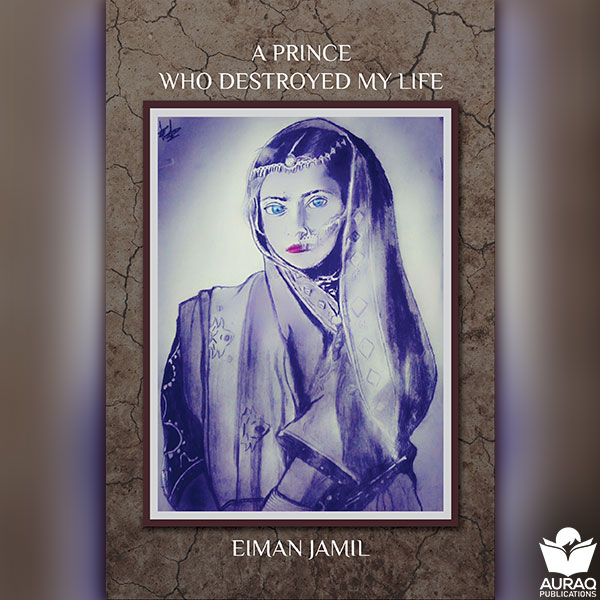 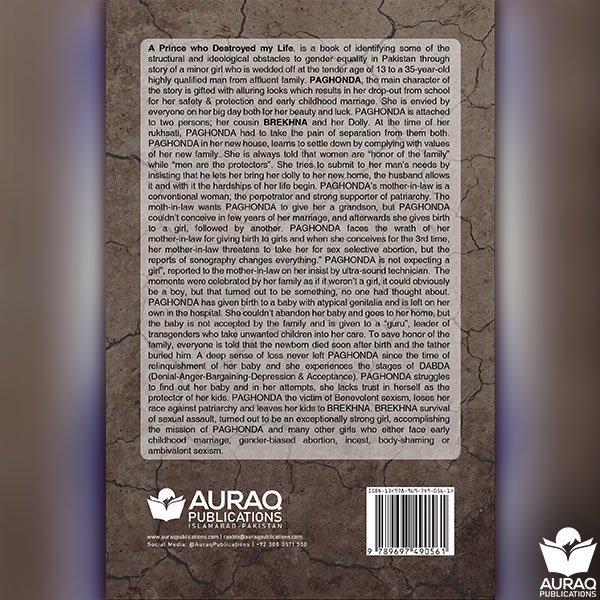 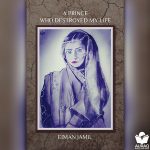 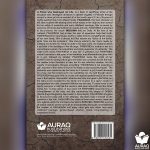 A Prince Who Destroyed My Life

A Prince who Destroyed my Life, is a story of a minor girl who is wedded off at the tender age of 13 to a 35-year-old highly qualified man from affluent family.

A Prince who Destroyed my Life, is a book of identifying some of the structural and ideological obstacles to gender equality in Pakistan through story of a minor girl who is wedded off at the tender age of 13 to a 35-year-old highly qualified man from affluent family.

PAGHONDA, the main character of the story is gifted with alluring looks which results in her drop-out from school for her safety & protection and early childhood marriage. She is envied by everyone on her big day both for her beauty and luck. PAGHONDA is attached to two persons; her cousin BREKHNA and her Dolly.

At the time of her rukhsati, PAGHONDA had to take the pain of separation from them both. PAGHONDA in her new house, learns to settle down by complying with values of her new family. She is always told that women are “honor of the family” while “men are the protectors”. She tries to submit to her man’s needs by insisting that he lets her bring her dolly to her new home, the husband allows it and with it the hardships of her life begin.

PAGHONDA’s mother-in-law is a conventional woman; the perpetrator and strong supporter of patriarchy. The moth-in-law wants PAGHONDA to give her a grandson, but PAGHONDA couldn’t conceive in few years of her marriage, and afterwards she gives birth to a girl, followed by another.

PAGHONDA faces the wrath of her mother-in-law for giving birth to girls and when she conceives for the 3rd time, her mother-in-law threatens to take her for sex selective abortion, but the reports of sonography changes everything.” PAGHONDA is not expecting a girl”, reported to the mother-in-law on her insist by ultra-sound technician.

The moments were celebrated by her family as if it weren’t a girl, it could obviously be a boy, but that turned out to be something, no one had thought about. PAGHONDA has given birth to a baby with atypical genitalia and is left on her own in the hospital. She couldn’t abandon her baby and goes to her home, but the baby is not accepted by the family and is given to a “guru”, leader of transgenders who take unwanted children into her care.

To save honor of the family, everyone is told that the newborn died soon after birth and the father buried him. A deep sense of loss never left PAGHONDA since the time of relinquishment of her baby and she experiences the stages of DABDA (Denial-Anger-Bargaining-Depression & Acceptance). PAGHONDA struggles to find out her baby and in her attempts, she lacks trust in herself as the protector of her kids. PAGHONDA the victim of Benevolent sexism,

loses her race against patriarchy and leaves her kids to BREKHNA. BREKHNA survival of sexual assault, turned out to be an exceptionally strong girl, accomplishing the mission of PAGHONDA and many other girls who either face early childhood marriage, gender-biased abortion, incest, body-shaming or ambivalent sexism.

Asia Jamil (Eiman), is one of the top-10 finalists for Women Building Peace Award around the globe, from USIP 2020. Asia has extensive experience in the promotion of peace and training on women’s rights, human rights, gender equality, youth empowerment and anti-harassment policies.

She has practical experience integrating inclusivity in promoting peace and she adopts innovative and creative approaches. These include working with teachers and students to rewrite fairy tales in which characters challenge harmful gender stereotypes for girls and boys. She’s Mphil in English Language Teaching and resides in Peshawar city, Pakistan.