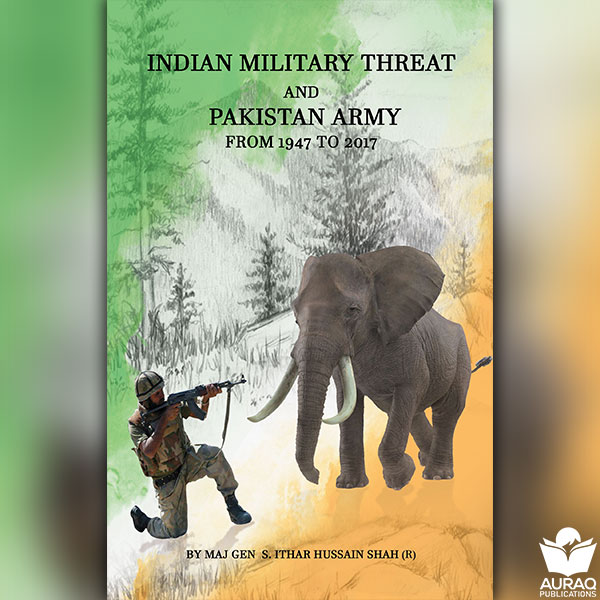 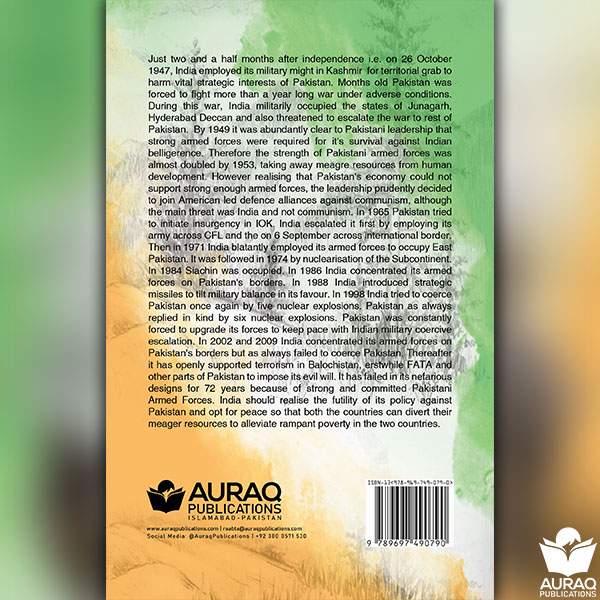 The purpose of this book is to bring out that constant Indian belligerence, threats, and direct and indirect aggression, shaped Pakistan Army’s size, organization, weapons, and doctrine from 1947 to 2017.

This book has been written by Maj Gen Syed Ithar Hussain Shah (R). It has 352 pages, seven chapters and 31 full colored maps. It covers Indian military threat in all manifestations against Pakistan from 1947 to 2017 and Pakistan Army’s response to this threat.

Just two and a half months after independence i.e. on 26 October 1947, India employed its military might in Kashmir for territorial grab to harm vital strategic interests of Pakistan. Months old Pakistan was forced to fight more than a year long war under adverse conditions. During this war, India militarily occupied the states of Junagarh, Hyderabad Deccan and also threatened to escalate the war to rest of Pakistan. By 1949 it was abundantly clear to Pakistani leadership that strong armed forces were required for it’s survival against Indian belligerence. Therefore the strength of Pakistani armed forces was almost doubled by 1953, taking away meagre resources from human development. However realising that Pakistan’s economy could not support strong enough armed forces, the leadership prudently decided to join American led defence alliances against communism, although the main threat was India and not communism. In 1965 Pakistan tried to initiate insurgency in IOK. India escalated it first by employing its army across CFL and the on 6 September across international border. Then in 1971 India blatantly employed its armed forces to occupy East Pakistan. It was followed in 1974 by nuclearisation of the Subcontinent. In 1984 Siachin was occupied. In 1986 India concentrated its armed forces on Pakistan’s borders. In 1988 India introduced strategic missiles to tilt military balance in its favour. In 1998 India tried to coerce Pakistan once again by five nuclear explosions. Pakistan as always replied in kind by six nuclear explosions. Pakistan was constantly forced to upgrade its forces to keep pace with Indian military coercive escalation. In 2002 and 2009 India concentrated its armed forces on Pakistan’s borders but as always failed to coerce Pakistan. Thereafter it has openly supported terrorism in Balochistan, erstwhile FATA and other parts of Pakistan to impose its evil will. It has failed in its nefarious designs for 72 years because of strong and committed Pakistani Armed Forces. India should realise the futility of its policy against Pakistan and opt for peace so that both the countries can divert their meager resources to alleviate rampant poverty in the two countries.

Purpose of this book is to bring out that constant Indian belligerence, threats and direct and indirect aggression, shaped Pakistan Army’s size, organization, weapons and doctrine from 1947 to 2017. (2017 because the book was completed in 2018)

Major General Syed Ithar Hussain Shah (R) was commissioned in 16 (SP) Field Regiment Artillery in 1976. He commanded 4 Medium Regiment, 62 Field Regiment, 1 Armoured Division Artillery,115 Infantry Brigade, and 2 Artillery Division. And was commandant of School of Artillery and DG Military Lands and Cantonments. He is a graduate of Canadian Forces Command and Staff College Toronto and National Defense University Islamabad. He retired in 2013.