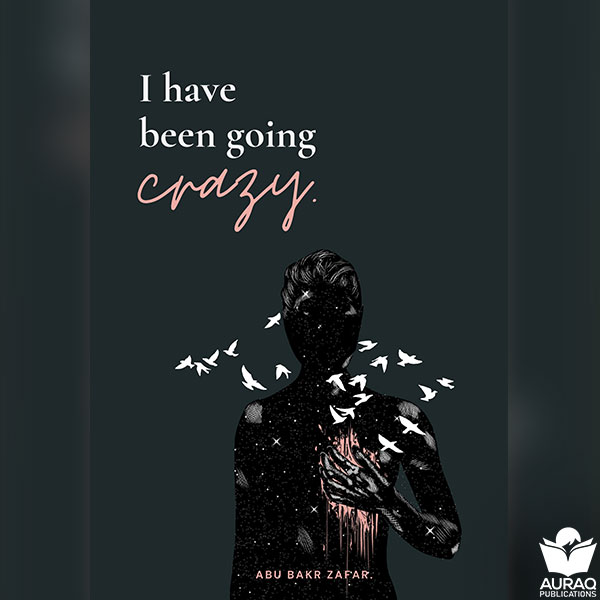 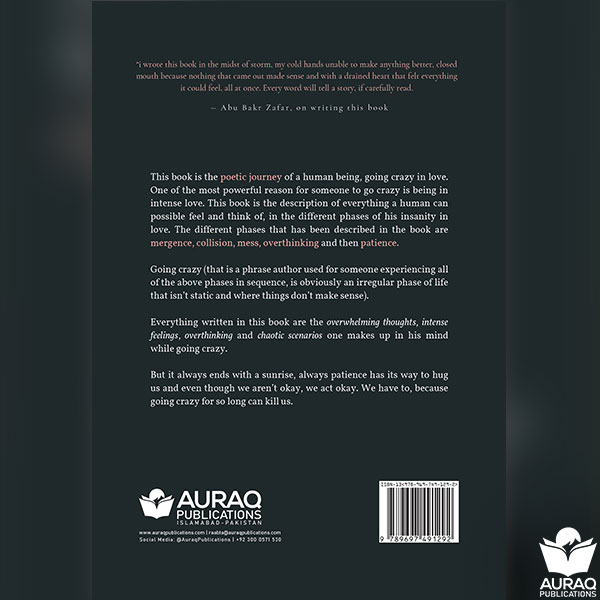 I have been going crazy

This book is the description of everything a human can possible feel and think of, in the different phases of his insanity in love.

This book is the poetic journey of a human being, going crazy in love. One of the most powerful reasons for someone to go crazy is being in intense love. This book is the description of everything a human can possibly feel and think of, in the different phases of his insanity in love. The different phases that have been described in the book are emergence, collision, mess, overthinking, and then patience.
Going crazy (that is a phrase I used for someone experiencing all of the above phases in sequence, is obviously an irregular phase of life that isn’t static and where things don’t make sense).
Everything written in this book is the overwhelming thoughts, intense feelings, overthinking and chaotic scenarios one makes up in his mind while going crazy.
But it always ends with a sunrise, always patience has its way to hug us, and even though we aren’t okay, we act okay. We have to because going crazy for so long can kill us.

Abu Bakr Zafar is a literature enthusiast, residing in Lahore. With immense hurdles in the way to be a student of literature before starting the journey as a writer, just like many other hurdles in his way due to the absence of his father & being a one-man army in his life, he still made it happen for himself as he has always been passionate about studying literature not for studying it but to be a part of the literary world and consuming more knowledge about writing and reading.

He published his first book “the speaking psycho” in late 2018 and continued his six books journey till the middle of 2020.

All of those books were read by thousands of people that was unexpected for him. He did it all without any guidance and support and. he had his failures, a lot of them, in the way since the first publication but he aimed to master all of them instead of giving up. He writes about the matters and things people prefer to overlook.

Everyone talks about viral topics, but there are some that are rarely spoken about. He chooses the rarely discussed topics that are hard to write about but what’s the fun in writing about things everyone talks about. In August 2020, he founded Aspiring Pens, a literary organization that helps to aspire and emerging writers with writing and publishing.
He as a founder works at aspiring pens as a visual architect to design every idea that comes out as a publication as well as a teacher to teach courses of writing, publishing, and editing. He aims to provide writers with everything they couldn’t have or be taught, at that organization and doesn’t want anyone to make the same mistakes and learn the hard way.

According to him; he wanted to play his part in spreading literature any way he could. So he turned his passion into his field and the profession. He published this book almost after one year of his recent book release. His literary organization kept him captivated, as people supposed but there were reasons he thinks aren’t authentic for him to talk about.

1 review for I have been going crazy